It’s promising to rain here so I have a “forced” non-walking day. Since today is the day I usually do all the laundry, it’s just as well, although the weather may impact on drying the clothes outside. Whatever. My DN uses her Friday to do all the household chores. I’m not as motivated as she is, unfortunately. I’m happy to just get laundry done. 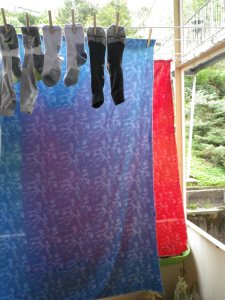 The final reservation to be made in advance was made today. DH and I already had our train tickets to Paris, and his return to Germany, my one-way to Bayonne, France. I also already had my reservation for the first night of my trip in St Jean Pied de Port (SJPdP), on the French side of the Pyrenees in Basque country. Because  I expected that I would not be able to sleep the night before, I had decided a while ago to treat myself at a well-recommended albergue for that first night.

This is L’Espirit du Chemin in SJPdP, which will be my first stop and provide the first stamp for my credencial.

But it wasn’t until recently that I decided that I should make a reservation for the second night, also.

The entire route of the Camino Frances can be broken into “stages,” a very general break down of a day’s worth of walking. Using this measure, the 800 km  Camino Frances takes about 33 days (I’m giving myself 5 weeks).

The first stage is reputed to be the most challenging. It’s the beginning/end for pilgrim routes all over Europe and pilgrims converge, fresh off the trains, taxis, buses, airplanes, and by foot, at SJPdP. No matter what shape you’re in, no matter how tired or hungry you may be, no matter how prepared or unprepared you are, if this is where you begin, there’s nowhere to go but up and over the Pyrenees.

The nearest town is on the other side of the Pyrenees Mountains. And, although these aren’t the highest peaks of the Pyrenees – those  are to the east – the climb is formidable. The altitude goes from 200 meters above sea level to 1400m in about 20 km straight up. From that high point in the mountains, there is a steep descent of about 500 m in 5 km to the town at the end of stage one, Roncevalles, in Spain. This climb is done, of course, with a full backpack in unfamiliar territory and in unpredictable weather.

About a month ago, a pilgrim was tragically killed while making the hike on this first day over the mountain. Apparently, he simply took a wrong turn and walked off a cliff (in serious snow conditions, which I don’t expect to meet in May, so don’t worry). If you see the movie, “The Way,” you’ll know that this was the opening scenario which propels the entire story. When I saw the movie, I thought the pilgrim dying on the first day was a little over-dramatic. Now I know it was not.

There are no places to find food, shelter, or warmth in the mountains. There are only two places along the way for the weary to find a bed and a meal during that first stage and they are both closer to the starting point than to the mountain. I’ve decided I would stop  at the one about 7 km from SJPdP at the end of that first day’s walk, making it very short but a final place to prepare for the next 750 km.

This photo of the Refuge Orisson, where I plan to spend the second night, is for the benefit of my friends living in the South Pacific. That white stuff is not cotton but a cold, icy thing called snow.

My goal is not to get to Santiago de Campostella first, or fastest, but to get to Santiago de Campostella. Providing a bed, dinner and breakfast may well be a welcome relief and, if not, well, it will be a pleasant final kick-off point for me.  My poor, old bones will probably enjoy the day off to re-evaluate my packing and walking strategies, re-adjust socks and boots, do everything except re-consider walking in the first place. .

Of course, there’s always the possibility that my staying an extra day on the French side of the Pyrenees will mean I miss a beautiful hiking day and end up having to make the trek in wet, windy, miserable weather the following day. Ah, well, I’ve never had any luck trying to second guess God’s plans for me.