The magnificent Cathedral in Leon.

I planned a two-day stay in Leon. I wanted to see the sights of this great city. I wanted to get my cell phone taken care of. I wanted to walk for a day without my pack and a sense of urgency. I wanted to play tourist for 24 hours.

But instead of going all tourist-y on you, Dear Reader,  I’m going to take you down a different path.

My plan was not falling into place. I had gone to the tourist office to find a hostel and had gotten a short list of places what might fit my budget. The old section of the city was packed with short, winding streets full of people and lacked obvious street signs.

In other words, I spent alot of time trying to un-lost myself.

I went from hostel to hostel but they offered no prospect of success – “We’re all full, every place is full today!”

I decided that I would try one last spot and, if I couldn’t find a bed there, I would go to the municipal albergue, spend the night, and leave Leon in the morning.

I found the building, and buzzed. No response. I buzzed again, preparing for a walk to the muni. Suddenly, there was a voice on the intercom – “Hola!”

I said I was a peregrina and looking for a bed for two nights. The door buzzed to let me in. However, it was too short a buzz for me to get the door open and before I could turn the knob, it was locked again.

Did I really want to stay here?

I rang again and, after another long pause, the door buzzed. This time I was prepared and went inside.

I looked at the mailboxes in the darkened lobby and found the name of the hostel. Second floor. The elevator looked iffy and so small that I took the stairs. The building was really quiet. No voices from inside the apartments. No sound of traffic. Somber and breezeless, more than a little discomforting.

I knocked on the door of the hostel. I waited and waited and, just as I was about to give up, the door opened and a frazzled yet friendly looking woman welcomed me in. I must have looked a sight, tired, sweaty, leaning on my hiking poles. She motioned me to sit and wait and she disappeared down the hall of the apartment.

Five, maybe ten minutes later she returned, wiping her hands on her apron. She grabbed some keys and I followed her out of the apartment, across the landing, and into another apartment.

She explained to me that she took care of the residents, making their meals and cleaning up after them. I had never heard of peregrinos being called residents but figured it was a local thing and if there was a bed, I didn’t care what I was called.

She showed me a simple, clean room, much less expensive and much larger than other singles I had stayed in so far. There was a pleasant amount of light coming in and the street outside was quiet.

She showed me the tiny kitchen and the bathroom down the hall.

The kitchen and bathroom had a surprisingly large amount of people’s stuff in them – towels, toothbrushes, plates, mugs, shampoo, a bar of soap, a half used box of laundry detergent. It looked like people lived there.

Whatever. The room would be mine for the next two nights. I didn’t ask about communal meals.

And now, Dear Reader, I’m going to do something I haven’t done before. I’m going to simply quote what I’ve written in my journal. I hope it isn’t too choppy:

I thought I was staying in a weird place, instead I was blessed – old people live in this hostel, hospitalera makes dinner, takes care of them – Great! surrounded by old people! – after shower in less than pristine bathroom (I doubt I’ll get diseases), I headed out to 1100 Mass at Cathedral – as I was leaving room, I ran into one of the residents, Elisa – at least 90, using her walker, she greeted me as she was also on her way out – I told her I was a peregrina, she began asking questions, asking if I had a “precio” – I had just told her I was on way to Mass so didn’t know if precio was something for Church? price? what? – she told me to wait – I did although it might make me late & I didn’t know what I was waiting for – she slowly returned with a picture she had made of the Cathedral! She gave it to me as a gift! – she asked me to ride the elevator down with her – how could I say no? – I squeezed in & she started telling me about all the sights I needed to see in Leon – a few minutes later we parted ways, me towards the Cathedral, she towards the park – what a blessing I had been given from a place I expected to receive bedbugs from.

I spent the rest of that day, and all of the next, wandering around Leon, visiting the park, the Cathedral, San Isodoro, San Marcos, Gaudi’s Casa de Botines, the Pantheon. 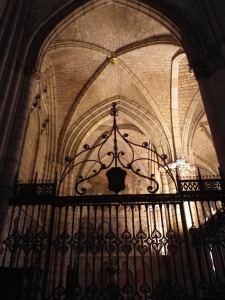 I’d been walking through gates on display at the Metropolitan Museum of Art in New York for decades. Now, seeing these in the Cathedral, I understood.

Gaudi’s Casa de Botines on the left, Town Hall on the right.

Medallions in the historic Plaza San Marcos mark each of the major cities one goes through on the Camino de Santiago de Campostella, from Roncevalles to Santiago. 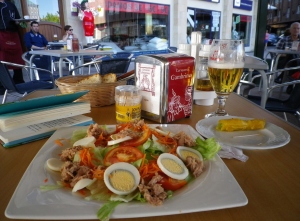 Can you imagine a more satisfying lunch?

. . . and met nice people, even some pilgrims I knew from previous encounters. 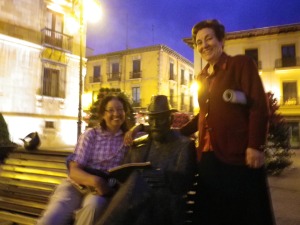 A Leon native and I share a photo-op with the statue of Gaudi, sketching away.

The rains came and went and the city folk paraded up and down the main thoroughfare, elegant, happy and comfortable, stylish yet open and friendly.

It took me 24 hours to realize that I didn’t have to lock my door in a hostel I was sharing with a bunch of 80 and 90 year olds. What were they going to do? Sneak in while I was in the shower and take my iPad?  There’s no wi-fi. Take my phone? I couldn’t even figure the phone out and I had already had it for a month!

And I felt badly that I had only had the one encounter with Elisa, who had been so kind and seemed so happy to have someone new to talk to. I wanted to see her again. I wanted to talk with her. I hadn’t even gotten a photo of her to remind me of her face, her voice, her kindness.

Then, serendipity. She was coming in as I was going out the next afternoon and I got her photo.

Thank you St. Julian. You done good. To quote my journal again, “On Camino, I am recipient of much more kindness than I deserve.”