Since Juan Carlos, Andres and I had spent the night in our own house, we slept as late as we wanted and were out on the road when we felt like it – 0830. 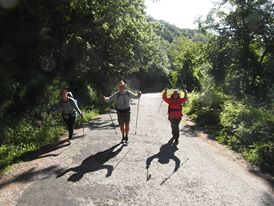 We hung around the village to return the landlady’s house key and thank her for a great stay in a nice home. As we lingered over breakfast, who should wander up but Christine, our Camino family member who had decided to stay someplace else the night before (missed out on those Spanish movie musicals, tsk, tsk). 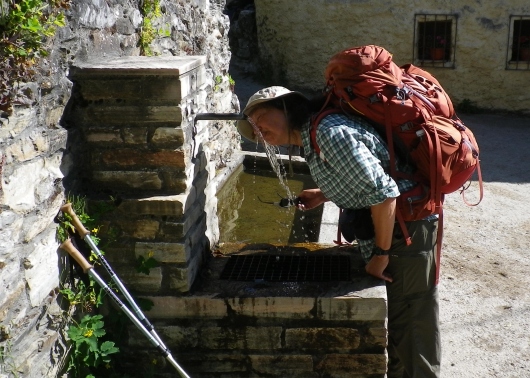 The walk to O’Cebreiro was challenging but not impossible. The weather was great – I began to wonder if I had seen the last of my wet Camino and should consider zipping the bottoms off my pants. But I also knew we were entering one of the wettest regions of Spain, so, no.

The countryside reminded me of weeks earlier when I had been a novice pilgrim, making my way through the rolling hills of Navarra.  Alone, alert to the yellow arrows  along the way, I remembered the vineyards I walked through and the mud.

I remembered looking through rain dripping off the brim of the baseball cap I wore under my rain jacket hood as I tried to keep my glasses dry and fog free.

I remembered the determination as pilgrims, strangers to each other, encouraged each other to the top of the hill which we promised was just around the bend up ahead, and which never was.

Now I was dry and following the arrows was second nature.

I no longer noticed my backpack anymore than you, dear reader, notice the shirt you are wearing right now.

These strangers whom I was walking with could crack the right jokes to make me laugh out loud. I knew I would be missing them all too soon.

We crossed into Galicia and found the stone markers that would lead us the final kilometers to Santiago. Was it possible? Were there really only that many kilometers to go?? Had I really walked all that distance? I still felt so good!

O’Cebreiro was beautiful, an unexpectedly active village on the top of a mountain, full of pilgrims and souvenir shops.

I was told that the church, Santa Maria la Real, was said to have held a relic of the original Crucifix. I prayed accordingly, wondering if my Saints had traveled with me all this distance so they could get to this place. I told them I was grateful for all the help they had given me on this journey.

About 15 minutes later I learned that, um, no, there weren’t any cross relics here.

It was the resting place for Don Elias Valina Sampedro, (1929 – 1989). He was the parish priest who gave birth to the modern Camino, as a way to help his tiny little parish. 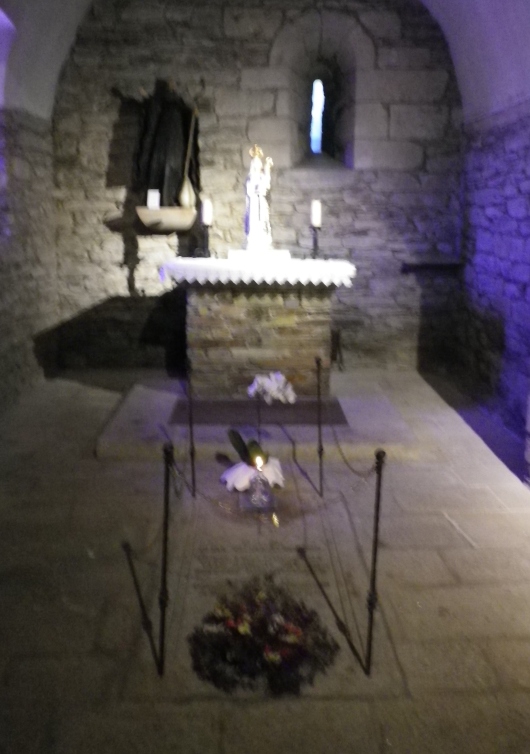 He knew his village was on the route of the ancient Camino and wanted to try to bring people back to, or at least through, the village. He brought his idea to the local leaders and they said OK, but you’re on your own. So, he went to the public works guys who were working on the roads and got their leftover paint.

With permission, of course, he painted arrows along the way to help pilgrims find their way from one end  of the village to the other. Slowly, the arrows extended to the other towns along the way and, well, here we are today, more than  200,000 pilgrims this year alone.

I was ready to call it a day at O’Cebreiro but the family insisted that we continue so on we went.

I hadn’t expected Alto de Poio to be the highest point on the Camino Frances – I had thought that was O’Cebreiro. But it is, with 1,330 meters compared to O’Cebreiro puny 1,300 meters. Done on the same day at O’C, it is just as challenging.

We stopped for drinks but all we could find were sodas from vending machines. But where was Juan Carlos? We couldn’t find him anywhere. Christine and I waited outside, cooling off, while Andres went to find his wayward brother. Finally, he found him and ushered us inside the local pilgrim office.

There was Juan Carlos, happily surrounded by dozens of old ledgers. He had looked through many, many of them to find one particular one. Years earlier, on another Camino, he had signed his name in the books kept by many places, and this was one of the few places where he could find that book again if he was lucky. He was, and we gazed at his signature and notes from way back then, his past self giving a note of encouragement to this, his future self.

We found the new book and added our names and notes. Maybe one day our future selves will climb this mountain again and remember this moment in time.

That day, we didn’t arrive at the albergue until after 7 p.m. We each fended for ourselves for dinner and I ate something at the albergue’s  bar while I blogged.

Our big break, however, was in our accommodations.

Because we had gotten there so late and there were four of us, the bunk beds in the main bunk-bed room were taken. The hospitaleros generously opened the overflow room for us and gave us the pick of the beds. But these were not ordinary beds.

Now, class, if you open you IKEA catalogs to the teenagers’ rooms section, you will see those lovely bunk beds that are double beds on the bottom and twin beds up top. Since the four of us were expected to be  among the last to arrive, we were invited to each have a bottom, double bed, to ourselves!

My bed is last on the left row, closest to the back wall. Christine has the bed across from me, the boys closer to the camera. One purple mat is in front of the shower, the other in front of the bathroom.

We had our own bathroom and shower in the room. This was lucky because I had gone to the crowded bunk-bed room to take a shower and went to the men’s shower room by mistake. You may use your imagination to figure out how I realized it was the men’s shower room (not by the tiny little man stick figure sign practically hidden away not in the center of the door).

Night fell. I fell asleep in the security of friends and strangers. But sad.

I was so close to Santiago. Was the adventure ending??

Not by a long shot.